WITH LASTA TO MONTENEGRO

This summer, the traffic company Lasta is organizing the transport of passengers on regular seasonal lines to the Montenegrin coast with a significant number of departures. The service will cover most of the territory of Serbia with departures from 25 cities, as well as the most visited Montenegrin summer resorts, starting from Herceg Novi, Igalo through Tivat, Kotor, Budva, Petrovac to Sutomore, Bar and Ulcinj. This year's season will open on June 26, when the first departure on the Belgrade-Herceg Novi line starts at 20:00.
From Belgrade to Herceg Novi, the favorite and traditional summer resort of our tourists, 4 departures will be organized, two of which will run daily at 20:00 and 21:00 and two that will run every other day at 19:00 and 19:30. Daily departures from Herceg Novi are at 20:00, and departures that take place every other day at 18:30 and 19:00. Transportation on these lines will be maintained on routes that go through Cetinje and through Mladenovac, Arandjelovac, Topola, Sutomore, Petrovac, Budva and Tivat. The last seasonal departures will be held from Belgrade on September 29, and from Herceg Novi on September 30. The first departure from Niš to Herceg Novi will be held on July 1 at 20:00 and will run daily until September 4 via Aleksinac, Prokuplje, Blace, Kursumlija, Sutomore, Petrovac, Budva and Tivat. Departure from Herceg Novi is at 19:30, the first will be held on July 2, and the last on September 5.
Daily transportation will be organized on the line Obrenovac-Herceg Novi, departing from Obrenovac at 19:00 and Herceg Novi at 20:00. The route of the line goes through Požega, Užice, Podgorica, Sutomore, Petrovac, Budva and Tivat. The first departure from Obrenovac starts on July 1, the last on August 30. The first departure from Herceg Novi is on July 2, and the last on August 31.
Tourists who planned to spend their vacation on the Montenegrin coast also have at their disposal a regular line Belgrade-Kragujevac-Kraljevo-Kotor, which is maintained throughout the year, departing from Belgrade at 12:30 and from Kotor at 06:30.
The largest number of these departures in cooperation will be maintained by Lasta and Lasta Montenegro, and certain departures will include Lastra Lazarevac, as well as carriers from Montenegro: Trans-jug, Božur DOO and Royal Travel.
Tickets for these destinations can be bought by passengers in Lasta's branches and bus stations, and there is also the possibility of buying tickets online.

In addition to the transport service, we also offer arrangements for summer vacations in Čanj and Dobre Vode, which users can buy at our travel agency on Savski trg.
Lasta is a traditional carrier for Montenegrin tourist destinations. During the summer, a large number of passengers trust her service.
We wish our passengers a happy journey and a pleasant stay at their chosen destination! 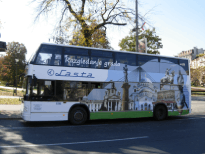